Precise Indoor Positioning is finally here thanks to Ultra-wideband RTLS

Precise Indoor Positioning is finally here thanks to Ultra-wideband RTLS

Current iBeacon enabled smartphone apps used for indoor positioning is valuable for many use cases, but it is limited in terms of precision and inherent latency.  Locatify has now integrated a new technology for very precise and fast location detection called Ultra-Wideband and has made it available for delivering super precise location based content to mobile apps/devices. The article will present the benefits of UWB and how it works.

From iBeacons to Ultra Wideband (UWB)

The iBeacon technology is popular today, being used widely with smartphone apps that deliver location specific content automatically to the user indoor or outdoors. Beacons are great as most devices have a bluetooth receiver and can communicate with beacons, but they do have their limitations in terms of positioning accuracy and latency.

There are many developers and content producers searching for more precise location detection, and more frequent location updates than what beacons can provide. To answer the demand for such a system, we developed and integrated a precise location service solution based on measuring distance using Ultra Wideband (UWB).

iBeacons – Keeping within the limitations of the technology

Locatify have been making Automatic Museum Guides providing an immersive audio experience, using the iBeacons, since they were first introduced in 2014. Two types of content triggering have been used; proximity triggering using a radius to an object (Exhibition piece) and by calculating the user’s position via trilateration and a grid of iBeacons.

Our advice to content producers is to keep the iBeacon limitations in mind when designing content and planning content delivery. A bad user experience is when the audio guide starts jumping automatically between stations (chapters), or the user has entered an area and the chapter doesn’t play automatically or starts late. Beacon installations can be difficult and may have to be improvised for each location due to environmental factors affecting the Bluetooth Low Energy signal.

There are other location and proximity detection methods out there, and they all have their pros and cons.  “Magnetic-field fingerprinting” technology to estimate location may work well for supermarkets with aisles, but not for open floor spaces like museums, galleries and airports.

The UWB spectrum was opened for commercial use in 2005 by the FCC for pulse-based transmission in the 3.1 to 10.6 GHz frequency range. Applications target sensor data collection, precision locating and tracking applications which is the focus here.

With UWB, we measure the time it takes the signal to travel from transmitter to receiver in order to calculate the distance in centimeters.  This method gives much better distance information than determining distance based on signal strength with iBeacons.

The apps can receive precise location data (less than 20 cm deviation) and location updates can be delivered every 100 ms if necessary. A user will carry a small UWB tag to monitor their exact location. The tag is equipped with a UWB transmitter and can feed of the phone’s USB port or with a coin-size battery with 1 year lifetime. It sends out a ping signal via UWB for every location update and is also equipped with an acceleration-meter which will keep it at rest if it is not moving.

The tag can be attached to the headphone, to the device itself or to the user’s body. The extra tag is necessary because the smartphone does not have any UWB hardware yet.

UWB Anchors are installed on the venue’s walls in fixed locations up to 25 meters apart. They can be 2.5m – 5m meters above floor level and have to be at least 15 cm from the wall or ceiling.  The anchors can be powered via USB or PoE (Power Over Ethernet).  For example, a 10000 mAh USB battery can power the anchor for 50-60 hours or so. 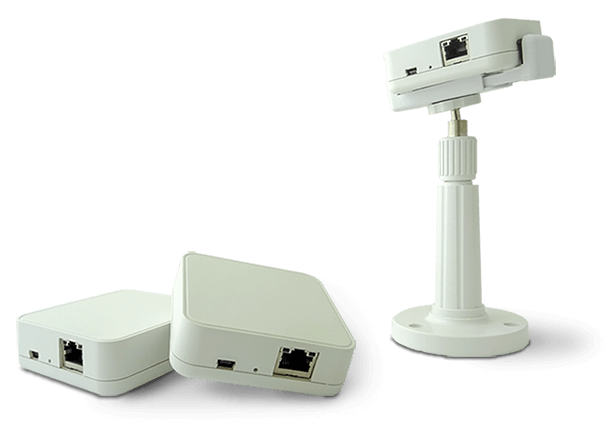 At least 4 anchors are needed for a 25×25 space. The anchors synchronize their internal clock via Ethernet cable or WiFi and then listen for pings from the UWB tags. Once synchronized, they record the time when the signal was received and pass it to a backend “Real Time Location Server” (RTLS) which calculates the tag’s position based on time difference of signal arrival at the anchors (TDoA).

The RTLS apps subscribe to location updates from the RTLS backend service using standard websockets or RESTful APIs to read the location data of a tag.  The RTLS has other nice features like recording location data and presenting reports like heat-maps and such.

UWB installations are far easier to setup than iBeacons and more predictable than iBeacon setups.  What’s needed are anchors on walls, RTLS Mini-PC box, tags and WiFi.  The content designer will then make the Guide in the Locatify Creator CMS and publish to the apps.

So why UWB now?

Big-industries have been using UWB for location detection of robots and transmission of sensory data in situations like automated warehouses for a few years. UWB solutions have historically been very expensive and therefore only applicable in larger industries and military installations.

In late 2015 we eyed an opportunity to offer precise indoor location services at an affordable price and started developing our own integration of UWB into our platform.  It was now possible because the price of UWB solutions began to drop when the company Decawave began selling inexpensive UWB chips that can be embedded into pretty much anything.  The chip is able to schedule transmission of UWB packets and measure to picoseconds the time a signal is received.

With this ability, it becomes possible develop algorithms to calculate distances based on the signal’s “Time of Flight” (ToF) or “Time Difference of Arrival” (TDoA).

How did we get here?

Locatify began the development of a UWB based solution in 2016 with the aid of the Icelandic research fund (Rannis).  The Decawave DWM-1000 module was at the core of the solution.

We first did a proof-of-concept using the Decawave TREK-1000 development kit, and then moved on to creating our own prototype that would fit our need.  The prototype consisted of a tag the user carries with them and anchors that are fixed on the walls.   Both were USB powered and the hardware the same except the tag also had Bluetooth to communicate distance to anchor values to the smartphone app.

Protype-0 was wired up of ready made Nucleo-64 prototyping boards from ST Microelectronics.  Bluetooth controller to it.  The first software was written in the quick prototyping tool mBed.org.   With this we refined the initial versions of our code.

Then it was time to build Prototype-1, which was our own MCU hardware with all components soldered on the board and port the code to the new hardware. The tag was about the size of two AA batteries.

We started of using a Two-Way-Ranging algorithm for finding the distance between anchor and tag and later moved on to the Time-Difference-of-Arrival method.

Two-Way-Ranging method and result message sent to the tag

Then we began experimenting with the software and implemented the Two-Way-Ranging algorithm to calculate the distance between a fixed location anchor and a mobile tag.  The tag would initiate the communication with each anchor with a “poll”, the anchor will reply with a “response” message, the tag replies back with a “final” message, then finally, the anchor reports the distance calculation in a “result” message back to the tag.

We then added an optional “results” message from the anchor to the tag so the tag would have the distance measurement and deliver it via bluetooth to the smartphone app. 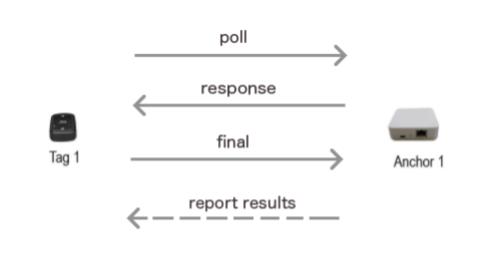 The tag would repeat this process for each anchor and then deliver the distance to each anchor data via Bluetooth to the phone.  We had to build a simple scheduler so two tags transmitting or receiving would not overlap one another.  To synchronize, we dedicated one anchor to deliver in the “result” message when the tag can next send data.  The dedicated anchor always had to be in range of a tag.

The tags required considerable power in this solution because of the number of messages being sent and received and the need to run Bluetooth hardware to communicate distance data to the app.

The ToA solution suffered the drawback of not scaling to high number of tags and the fact the tag consumed considerable energy as more packets are transmitted and Bluetooth hardware is powered.  We decided to move to the TDoA algorithm and add the RTLS backend computer to calculate user’s position based on the time difference of signal arrival from tags to each anchor.

The anchors are mounted on walls and receive UWB ping signals from the mobile tags and calculate distance between the anchors and the tags. 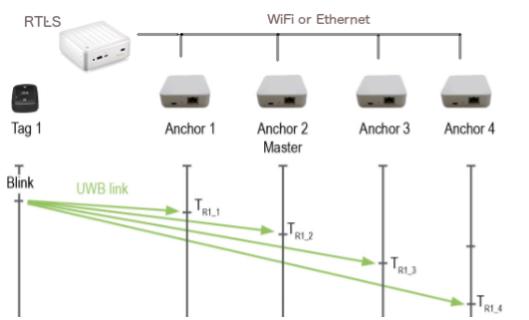 Figure 2. Time Difference of Arrival from tag to anchor

This approach is somewhat similar to how outdoor GPS works except it’s reversed; tags are comparable to the GPS satellites and the anchors are comparable to GPS receivers.  What makes it “reverse” is the UWB anchors have a known location, and the tags are mobile.

Packaging and ready for sale

Locatify has partnered up with great companies to provide the hardware, packaging and the RTLS server along with admin and configuration tools.  All this is nicely integrated into the Locatify Creator CMS platform and apps.

The future is bright

We will see more applications powered with UWB location detection in the future as the price of the hardware and software solutions is rapidly decreasing.  Augmented reality (AR) experiences will play a role with UWB as precise location and direction information opens the doors for even richer augmented reality apps. Locatify’s focus is on making location based apps for augmented reality audio and indoor navigation apps.

The lack of UWB hardware on the smartphone requires the user still to use the extra UWB tag, but as the price per tag is rapidly decreasing and they are small in size, this is not a major hurdle to overcome.  In the future, the UWB hardware may well become built into Smartphones or we could build the tag into the headphones as well.

The future is bright for UWB solutions and totally automatic high granularity guide apps are now possible in the indoor settings.