There has been an increase in global interest around digital treasure hunt games following the widespread popularity of Pokemon GO which is reflected in our latest releases. An ongoing game is taking place inside Lyngby Storcenter, a shopping center in Denmark. The game is in the app Geotrail GO app, which was made in Locatify’s Creator CMS. Another ongoing game Zoom into Nano, is happening at Science World in Vancouver, Canada, which is issued in Locatify’s app TurfHunt.  Both games have seen a rise in interest from across the globe.

The Lyngby Zoo game in the shopping center is part of a Halloween theme. Children (and adults) over the age of seven years old are invited to participate in the game with the plot revolving around finding animals that escaped from the nearby zoo. When a player approaches the right place a challenge appears on the screen, which needs to be solved right away to earn points. All children involved in the game win small prizes at the center. As the participants sign in using their email addresses they have the possibility to win a larger prize. Geotrail Go is the first app which offers orienteering both outside and inside, the company Geotrail focuses on team building both for children and adults. 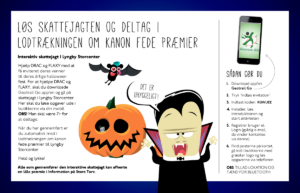 The purpose of the Hunt in the science museum – Science World is to enable young visitors to discover interesting and amusing facts in the exhibition, Zoom into Nano. Players receive instructions and and have to go to the right places to solve challenges. They do not know in advance the treasures are hidden because they are not marked on the map, and need to make an effort in the search. When they find an estimote beacon they have entered the right place. Locatify has designed the system used in the game, and the personnel at the museum have designed and created the game and setup the beacons around the museum. Jeff Porter at Science World who was in charge of creating the game used transparent pictures on top of the map, which he connected the actions to, in order to hide them so the hunt would become more interesting for the students.

Jeff Porter: “We created our game to complement our feature exhibition, Zoom into Nano. The idea was to extend the learning of the gallery out into our permanent exhibition spaces, encouraging our visitors to find nanotechnology connections in areas of science they might not expect. We designed the scavenger hunt particularly to appeal to high school students, giving high school field trips another piece of interactive content to use to enhance their science centre visit” 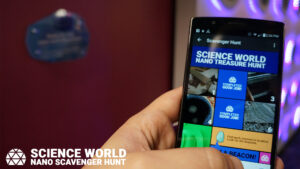 Locatify offers an easy to use content management system for creating the games played in scavenger hunt apps outdoors and indoors. It has grown in popularity, with many different games being created for various groups, with a large percentage being used for students in schools. The focus is set on creating a way to learn and play at the same time, promoting cooperation, competition and outdoor activities.

Locatify presented the first indoor games using BLE iBeacons earlier this year at UT Messan, the information and technology conference in Reykjavik, Iceland. Since then our customers have welcomed the chance to create games indoors. Locatify is constantly working to advance the technology with recent added features such as “submit a photo challenge”with the photos being visible on the Observer website where the score and the location of players are presented to the Game controller. Allowing game designers incentivising players with coupons that players can earn for finding certain numbers of treasures or completing specific challenges. Now game designers also have a choice of placing a different picture on the screen for a hidden treasure, active treasure and found treasures.

Treasure Hunt Games and discovery apps are becoming increasingly popular and with the availability and ease of use of the technology, it is no surprise we are seeing an increase in games being used to attract shoppers, museum visitors, to create teaching material and just for fun like at birthday parties.