The Tour Bus Company has a branded Locatify app.

Each bus-seat is equipped with an Android device with the branded Locatify app installed. The app offers the visitor audio guides with maps and extra content in 10 languages. Travelers have welcomed Reykjavik Sightseeing tours and are pleased with the service offered. 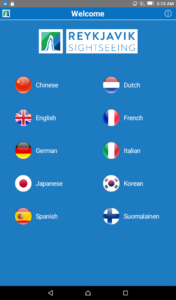 The visitor selects the trip on the device and the app will show the route and the points of interest on the way. During the trip, the app uses GPS to locate the bus and plays automatically content at specific locations so the visitor can sit back, look out and listen.

The tours include the full-day Golden Circle and the South Coast tours. All their tours are available in English, French, German, Dutch, Italian, Spanish, Chinese, Japanese, Korean and Finish.

There is an English speaking guide in each bus but there is an extra value in the trips when tourist can listen to stories in their own languages on the road.

The content for the bus tour app is uploaded to Locatify Creator CMS and published to the app. Þorleifur Thorlacius at Reykjavik Sightseeing was in charge of the content production and using the Locatify CMS to put in the content; create the tours, placing POI pins on the map, upload audio, text and pictures. 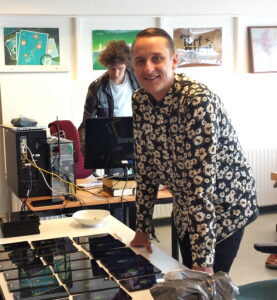 Þorleifur is preparing the Android devices at the Locatify office.

The staff can manage the tours and change them when they want and publish changed content to the devices which upload during the night through a WiFi connection on the bus.

Preparing the buses and devices

The project to equip the buses with the tablets and app was managed by Þorleifur Thorlacius at Reykjavík Sightseeing.  All the buses have a USB connector by every seat and a cable-lock to secure the device.  Installing the devices and apps was managed by him with a little assistance from Locatify.

Stories on the road in 10 languages.